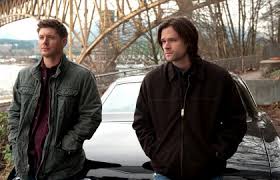 Sam, suffering from the effects of the rituals, is visibly weakening, but still protests to being coddled by Dean. The brothers get a call from their friend Charlie, who has a case for them in Kansas. Dean, worried about Sam, brings Charlie instead of Sam along for the investigation, but Charlie proves inadept at going undercover. Dean begins to train her to be a hunter. But in a confrontation with this monster, Charlie is forced to confront her past.

Firstly, I love Charlie to bits. I mean, she's probably the most hilarious and relatable character in the entire series. She's nerdy, a gamer and a fangirl. But in her last appearance we know for certain that she's moved around a lot under false identities and that was never really explored in her second appearance. But this episode goes right to the heart of the problem. She finds a case for the brothers with a monster that thrives on fear, plunging her into a never-ending loop of one of her worst childhood nightmares--why she's always running. Felicia Day's acting here was touching and not over-the-top, and with complete honesty, the way most actors and actresses cannot achieve.

Sam and Dean's personalities from the previous seasons are reemerging--not that they ever completely vanished. But as Sam starts suffering from insomnia, we see Dean's big brother side again (I missed that).

A high point of this series is actually Dean and Charlie's bromance. Their banter is adorable and the close relationship they develop by the end of the episode makes Charlie one of my favorite recurring characters. MORE CHARLIE PLEASE.

Also I cried at the end. Be warned.