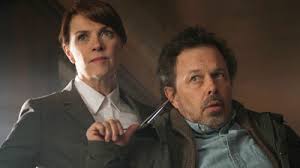 It's time for Sam to complete the trials and slam the gates of hell. But Castiel has been following Metatron's advice to close the gates of heaven--but does Metatron have ulterior motives? Naomi continues to hunt for Castiel, and can Dean figure out what's going on with Sam?

OH MY GOD. The season is finally over. Alright. I will try to write this without bursting into tears. I probably won't be able to restrain myself, so it might be a bit spoilery.

So Castiel's being good and following Metatron's orders to do all that killing. Sigh Cas, don't you know that if you have to kill people, it's probably not good? Metatron is amusing, but *flops*

So Dean and Castiel have some nice bonding time (The Destiel fans are screaming) and they do some beautiful things together. But then Naomi turns up and she's crying and begging Castiel and I totally get it and for once she's a wonderful character and she delivers this beautiful line about the angels.... Somehow Supernatural always seems to cast the perfect actors who can convey exactly the right amount of emotion and perfection as well as play a snarky badass or evil scheming bitch...

Metatron suddenly revealed his ulterior motives (I shan't tell you) and god. God.

Sam tried to cure Crowley through torture, and he almost succeeded. Crowley was extremely emotional and human, applause for Mark Sheppard there. You really feel for Crowley.

Then Dean found out that by closing the doors of hell you have to make the ultimate sacrifice--by dying. So he rushes back to Sammy and he's shouting at Sammy to STOP AND NO YOU'RE GOING TO DIE and Sam just said..."so?"

I burst into tears. The acting there was just at the most amazing I've ever seen it. They proceeded to have a desperate argument/heart-to-heart with some of the best acting I have seen ever, and both of them were crying. The whole last few seasons have been leading up to this and tears were just streaming down my face.

And then the ending. The ending. I won't elaborate, but I will say this: METATRON. YOU ARE GOING DOWN.

Grade: A+ Brilliant finale. BUT CLIFFHANGER?!?!?