Well. This book blew me away. 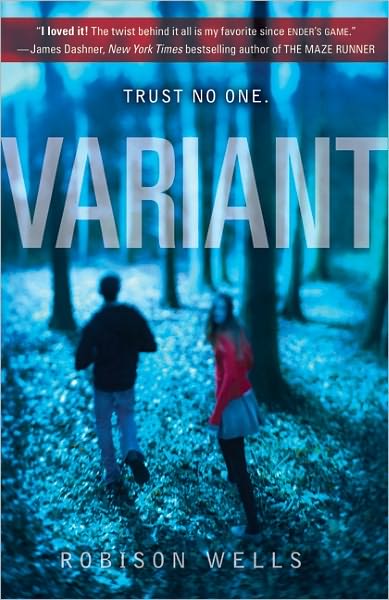 Bensen Fisher is a social outcast who gets a scholarship to an exclusive school to get a break. But upon arriving at the school, he realizes that nothing is as it seems. There are no adults, no phones and no internet. Nobody gets out, and breaking the rules will sentence you to 'detention'--and no one has ever come out. Everyone is a teenager, and the schools runs on a point system--you earn points for doing work, like administration, cleaning or security, and you can use the points to buy stuff, like clothes and tools. The teens are split into three groups: The Society, full of rule-abiding control freaks, The Havocs, the aggressive bullies who follow the rules anyway, and the Variants, the rebels and outcasts--the ones who still have hope of getting out. Bensen immediately joins the Variants, but as he starts to dig deeper than anyone has before, he discovers deadly secrets about why they were all brought there.

So I literally just finished this a few minutes ago. It was great. So the story picks up pretty quickly. I would say the book really started when he was being introduced to his schoolmates. He immediately gets into a fight and is forced to pick a side. I loved this Lord of the Flies thing again, where they have to build their own systems to get along, especially with someone watching them. I also really loved the cameras and the school. It had a very Big Brother vibe. The school is also really well described, the sterile environment and the students' behavior toward it. All the character's reactions are relatable--if pushed into an environment like that, I would probably conform the way majority of the students did. Bensen is a stunning hero, being totally average in every way and more of an outcast than most. For once, a character's average-ness is actually showed in the story, and his curiosity drives you to read on. As the plot progresses, the suspense grows and the other character's perfect personalities begin to crack. The action from all the paintball wars was exciting. It was perfect. Everything worked out exactly the way you expected it to, but also not.

I don't have many negative things to say about this book, except that some of the minor characters were overlooked or had way too overwhelming personalities. Also, I find the whole setup about the school a bit fishy and underdeveloped and not much of an explanation is given. But I won't spoil anything there.

Grade: A Loved it. It wasn't totally brilliant, but it was great. For fans of the Maze Runner series.
Posted by Jeanne Izzy at Thursday, April 18, 2013