TV Review: Doctor Who-Journey to the Centre of the TARDIS

Title: Journey to the Centre of the TARDIS (Doctor Who) 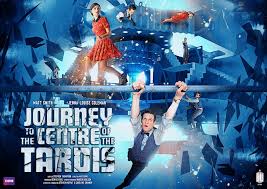 After crashing into an android-run salvage ship, the Doctor and several of the android workers venture into the destroyed TARDIS to save a trapped Clara, running into the secrets of the TARDIS. Meanwhile, Clara explores the TARDIS while running from a deadly monster, the origin of which the Doctor will not reveal.

Okay If I said the last episode was good, I'm lying. Because this just made me so incredibly happy. The suspense was incredible, and you can't stop watching once the Doctor has stepped back into the TARDIS.

We finally see how the mystery of Clara is affecting the Doctor when he bursts with paranoia, and he finally cracks and unwittingly reveals his secret to Clara. Matt Smith's acting was brilliant in those parts, where you can really see what all this buildup has been leading to. We can see clearly his regret from the previous versions of her, and his regret from all the previous companions that he's had and lost. Truly impressive writing there.

Clara's adventure through the TARDIS was intriguing--I mean, most fans of Doctor Who would be anxious to find out what lies in the mysterious depths of the TARDIS because we've never really explored the interior so thoroughly. All the tiny little nods to the previous episodes and companions seem to be prevalent in this new series of Doctor Who. We get to see memorabilia from previous adventures, like the Doctor's cot and Amy's toy TARDIS (I was practically crying by then). And Clara's quips at the TARDIS added extra fun. But when Clara reads the Doctor's name and tries to mention it to him, he immediately stops her, adding to the big mystery about the Doctor's name. Her curiosity mirrors what the viewer is feeling and the Doctor's deliberately elusive responses make you feel Clara. Moffat.

Unlike the previous episodes, the resolution didn't feel rushed here. The climax came with a steady build and didn't rush into the action too quickly and the ending was sufficiently built up to leave you satisfied. And I never guessed the ending until, you know, the ending. So great work there.

One thing I totally didn't get was the android brother storyline. I mean, I totally understand that they needed their supporting characters to have their own personal storyline, but I just didn't feel the weight of it. But, of course, the Doctor's storyline was what I was paying attention to.

I loved the visuals in this episode. We've never seen the whole interior of the TARDIS, and I think they did I great job of making it look impressive. And the atmosphere of the TARDIS was a big part of the episode.

Grade: A+ YOU GO MOFFAT YOU GO.