Okay, I've been a fan of this series for ages, so it's a bit hard for me to be objective here... 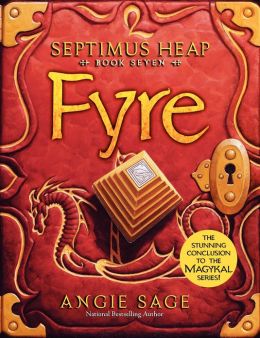 In the shadow of the Darke Domaine, Marcellus Pye is reinstated as Castle Alchemist. His job is to perform the DisEnchantment on the malicious Two-Faced Ring. But Marcellus seems to be harbouring a deep secret--a secret with some connection to the surprisingly warm Deep Freeze. Yet the time as come for the spell on the ring to be broken and for the two evil wizards Inhabiting the ring to roam the earth once more. What's worse, they have sworn revenge on the Queen and her descendants. It's up to Septimus, Marcia, Marcellus, Jenna and the others to save the Castle.

I've been looking forward to this for ages, so I'm a bit biased. But I'll try to be as objective as I can with this.

I loved this series from the start, but the quality of the story seems to have decreased book by book. I loved the return to the Castle in Darke, but generally the storyline has gotten a bit weird (like Maximum Ride, but not as bad thank the lord). This was a cool conclusion to the fantasy series--it ended by tying up the loose ends, bringing together characters from previous books who's purpose has been hinted at. It also gives you some very satisfying answers to questions about the series. The characters that have been developing all the way since the first book shone through and keep the plot going, bringing the series to a satisfying end.

One thing first: I just love the universe Angie Sage created. It's probably one of my favorite ever magical worlds and I just love it. It also gives a lot of room to explore instead of being confined to usual standards. And now that the characters, are teenagers, it brings a completely different dynamic to the story and the way they approach problems.

However there were issues with this book:
One thing that really bugs be about this series is the gap in character development. Like, for example, some characters just act completely out of character from book-to-book. It gets a bit frustrating. And the traditions of the Queen are just really complicated and new things keep getting added, as if Angie Sage was just making it up as she goes along. And while they roped in many of the characters like Hotep-ra for the climax, it just felt a bit rushed after all the complications that have been building up.

I also didn't really like how superficial a lot of the relationships between the characters seem to be. Just...eurgh.

But I loved how it ended. It seemed the most appropriate way that the series could have ended and I'm really happy.

Grade: B+ Awesome end to the series that way kind of getting worse book by book