This is an old series I think, well not that old. But Emily recommended it and kept bugging me to read it. And I finally made it through the first book. (Also I'm still reading Promised it'll be my next review) 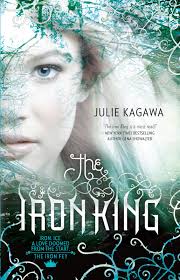 Meghan Chase's life has always seemed slightly off--the way people seem to completely forget about her, or how she's never been to her best friend's house or met his parents, not the mention her father's mysterious disappearance when she was six. But when her best friend Robbie becomes strangely protective of her, everything suddenly seems different. But she could never have guessed that she was the daughter of Oberon, king of the Seelie, or the Summer Court. But when he brother gets kidnapped, she must do all it takes to save him, with the help of Ash, prince of the Winter Court and her natural enemy.

This took a dreadfully long time to read. I don't know why. It was something about the mythology. I read Holly Black's Tithe a while back and while I found it okay, I couldn't make myself read the next book. So when I returned to the mythology of faeries and Seelie Courts and all that, I hope you understand my hesitance (is that the right word?) to read.

I liked this book okay, I guess. The mythology was a bit much for me. The minute you start the book, it's slightly confusing. Some things are so glaringly obvious that you want to scream at Meghan. Also the faerie court setting is more than WAY overused already. I don't know who came first, but some of these authors seem to be copying each other.

Let's talk about the characters, shall we?

Meghan: She's cool and pretty human-ish, (well she's a faerie but whatevs). Though she has this very common problem of ogling superhot guys in totally inappropriate situations. Like in Court. Eurgh. And I don't understand characters sometimes. She's at the most dangerous position she could possibly be in, and she is told to just shut the hell up and stand there, but no, she has to say something and get herself into, pardon my french, deep shit. Also, she has thing complete inability to let people do stuff for her. I mean, I love my strong, independent woman, but she's completely useless sometimes (example someone's fighting to save her and tell her to GO and she's like NO I HAVE TO HELP and she throws something at the monster and gets her ass kicked you see what I mean). Seriously. Girl.

Puck/Robin: Yeap her best friend is Robin Goodfellow, the mischievous Puck from A Midsummer Night's Dream. Firstly I have an issue with how quickly Meghan accepted him as Puck, instead of her best friend Robbie. He was largely absent for this book, but he was cute and adorable and I like him. I also fancast Robbie Sheehan as him because he's adorable and cute too. (Also I'm writing this having just returned from my school's Renaissance Faire, so having that image of Puck in my mind kinda ruined a Midsummer Night's Dream for me...)

Ash: Okay. He's like your typical bad boy with angst and stuff, but guess what: he's a faerie prince! So yeah and he's an awesome action hero and stuff. Probably best part of the book. But again, god damn insta-love. They literally kissed once. But their romance, while expected was pretty unexpected nonetheless. Nice.

The Faerie Courts: I'm sorry, so terribly sorry. But it was bit overwhelming. For some reason, the definition between the real world and the faerie world confused me and seemed to blur to the point that I didn't even know what was going on anymore. Are they in faerie world or Vegas? That sort of thing. That was probably one of my biggest issues with the book that made me so slow to read it.

The villain: He's a mystery for a large part of the book and I think that mystery was pretty well done. He was defeated too easily, though.

The writing was pretty direct and descriptive at the same time, and it was pretty fluent, so I think it was alright.

Grade: B. Pretty good, with a few issues that sort of overwhelmed and confused me.