Okay, this is the first review I've done that I haven't read the book to the end. 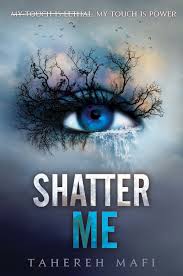 Synopsis (Okay this is one of those cases where I take it from Goodreads because I literally do not know how to summarize this book):

Juliette hasn’t touched anyone in exactly 264 days. The last time she did, it was an accident, but The Reestablishment locked her up for murder. No one knows why Juliette’s touch is fatal. As long as she doesn’t hurt anyone else, no one really cares. The world is too busy crumbling to pieces to pay attention to a 17-year-old girl. Diseases are destroying the population, food is hard to find, birds don’t fly anymore, and the clouds are the wrong color.

The Reestablishment said their way was the only way to fix things, so they threw Juliette in a cell. Now so many people are dead that the survivors are whispering war – and The Reestablishment has changed its mind. Maybe Juliette is more than a tortured soul stuffed into a poisonous body. Maybe she’s exactly what they need right now.

Juliette has to make a choice: Be a weapon. Or be a warrior.

I don't like bashing books unless they're really bad and I can't form anything that I can say without either sounding overly offensive or sarcastic. So the rant goes in.

I tried really hard with this book. I really really did. I first tried it one day and at some point, I got so fed up with it that I chucked it into my bag and didn't look at it for weeks. Then I fished it out and tried to pick up where I left off (yes I have good memory I could remember). And again I stopped. And I gave it one. Last. Try. And right now it's lying at the foot of my bed so that I won't tear the spine in half.

I mean, the premise of it was simple enough. A girl with poisonous touch, meets guy, is manipulated by other guy, runs away with first guy, falls in love, all that. Simple. And Tahereh Mafi did try to make the writing style different, by blending the raw voice from Chaos Walking with the typical YA novel first person commentary. Great. And the world building was typical YA dystopia--violent, weird and more than a bit unnecessary. Let's elaborate on that, shall we?

So this will be a walkthrough of the plot until I threw the book out.

The plot was simple. I mean, a lot of books get away with simple plots. It's fine. The idea of a girl having poisonous touch is fine. I mean, it's biologically possible. But the whole "rush of exhilaration" thing doesn't make sense. Like scientifically. That was just a more than slightly lame plot point to add more of that angsty teenage conflict.

And then, boom. Out of nowhere, we get our lovely hot guy Adam, joining Juliette in her cell. After some predictable banter and "hate", the warm up to each other. And then BAM Juliette's taken from her cell, Adam's supposedly evil and she's being controlled by superhot other guy, Warner.

I'll take a minute to praise Tahereh Mafi for being creative with Warner. it's not all the time that our "other" guy is totally screamingly evil. That was pretty original. *slow claps* His evil plots were impressive and pretty well thought out.

Okay, back to my rant. Turns out Adam isn't evil at all, but instead is totally good and oh, did I mention? He's in love with Juliette. Apparently had a crush on her for years before she was thrown in a jail cell. And he's the only one who can touch her without getting hurt. Wonderful. And so the hot makeout scenes continue. Love, love, love, angst, angst, angst, but Warner's evil plots in between, displaying Juliette's powers while she spends the whole time whining about it and trying to "rebel".

And then BAM she decide's she's in love with Adam and they run away together. Far too easy, if you ask me. And turns out, Warner can touch her too. And they run away to Adam's house and *mushymushymushy* and he has a brother who's perfect and adorable and they pass their lives perfectly and wonderfully and-

And I slam the book shut. And there it lies. At the foot of my bed.

Well excuuuse me, but I didn't know that being locked in a cell with no sunlight for a few years with practically no food would leave you looking like a perfect beautiful supermodel. I should try that sometime. And I know you've been scorned and treated badly your whole life, but you shouldn't be whining and complaining and moping all the time. *slams head in frustration*. And if hot guy who likes you tells you that there are no cameras in the bathroom and brings you in there, what the hell?! What the hell would make you think that he's going to rape you? When did you even learn what rape is? And I'm sorry, making out a few times in a shower isn't love. It's called hormones. And I know you haven't had eye candy for a while, but you don't have to oogle every single guy that you see. Seriously. The psychopath who's forcing himself on you and using you to strike fear in people, no matter how handsome, is not oogling material. Just no.

Dear Adam, you have no chemistry with Juliette whatsoever. Your declaration of love was sappy and completely ridiculous, and you really didn't have any time to actually fall in love with her. Also, what made you think that escaping was a good idea? Really? And stop angsting. Just. Stop.

You redeem this book. You're different from other guy characters. You might be sick, sadistic and psychopathic but you make me happy.


Last thing I feel the need to comment on is the writing style. Tahereh Mafi tries to mix it up by using Juliette's internal dialogue, by cancelling words and writing in thoughts. But please, be consistent. It seems to randomly switch between Bella Swan-style commentary and Todd Hewitt's broken thoughts. It was distracting and annoying. Stoppit.