So I found this at a sale in my local bookstore...four days before the actual release date. So I prompted swiped a copy and covered up the stack ahahehehehehe. 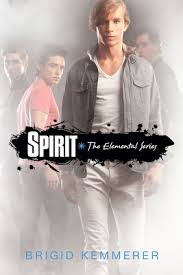 Hunter Garrity just wants to be left alone. He’s learned the hard way that his unusual abilities come at a price. And he can’t seem to afford any allies.


He’s up to his neck in hostiles. His grandfather, spoiling for a fight. The Merrick brothers, who think he ratted them out. Calla, the scheming psycho who wants to use him as bait.
Then there’s Kate Sullivan, the new girl at school. She’s not hostile. She’s bold. Funny. Hot. But she’s got an agenda, too.
With supposedly secret powers rippling to the surface everywhere around him, Hunter knows something ugly is about to go down. But finding out what means he’ll have to find someone he can trust…

So my local bookstore had this a few days earlier than the actual release date, so yay!

This book goes deeper into Hunter's character, which pretty unexplored in the previous books. We finally get to see the truly vulnerable side, behind all the manipulating and faking. I didn't like the second book much, but this book... let's just say I spent most of this book bawling my eyes out.


We get to see the toll all the past events have taken on Hunter and how he's dealing with the mistrust of basically everyone he knows. We see the way his father brainwashed him into becoming the borderline soldier he is. Seeing as he's one of the less developed characters from the previous books, it was great to see that Brigid Kemmerer wasn't missing any corners.

We have the girl, Kate. As a character, I don't really know what to think about her. That's what confused me about this book. Hunter is constantly paranoid that people are manipulating and using him for some reason or other, so you're not sure who may or may not be telling the truth or have ulterior motives. That's what set the book apart from the other two. Back to Kate. She was interesting and pretty different from the other love interests. She's confident (which I love because she's able to think around her heart throb moments, I love that when characters can. It just makes them realistic) and I'm not sure, but it could possibly annoy some people. It's an opinion, I guess. But again with the insta-attraction. Why. Why. Like what is the likelihood of two characters just liking each other and flirting instantly and clicking and being perfect and--gah. Also, Kate's internal dialogue was extremely confused. Extremely. I mean, get your sh** together, girl.

The plot in this one was slightly confusing and I wasn't sure who exactly was trying to kill whom in this book. But the action was awesome. And for once, some actually died. Like, not some minor characters or random people in the crowd. Like actual characters died.

Rule #1 of writing a realistic book: If you're writing violent action, at least one person dies. There is an infinitely small chance that all your main characters will survive.

So, thank you Brigid Kemmerer.

But the antagonist was a bit flatter than the other books. Like the main antagonist of this book, in particular. Calla, from the last book is still interesting, frustrating and manipulative, and you can tell something's building up. But the other antagonist, whom I will not name, seemed sort of one-dimensional and textbook manipulative.

Like note, Hunter and Kate had some lovely text conversation, which I must applaud the writer for being real about it. I mean, the emoticons they used are the emoticons I use. *slow claps for authors who know their audience*

Grade: A- Pretty good book, much better than the last one.